Spiroergometry (CPET) is derived from the Latin word "spirare" (to breathe) and the Greek words "ergon" (work) and "metron" (to measure). In other words, the respiratory gases are measured under load. Stress here means testing either on a bike or on a treadmill (running or walking). This diagnostic leads to various statements about the (endurance) performance and the metabolism. 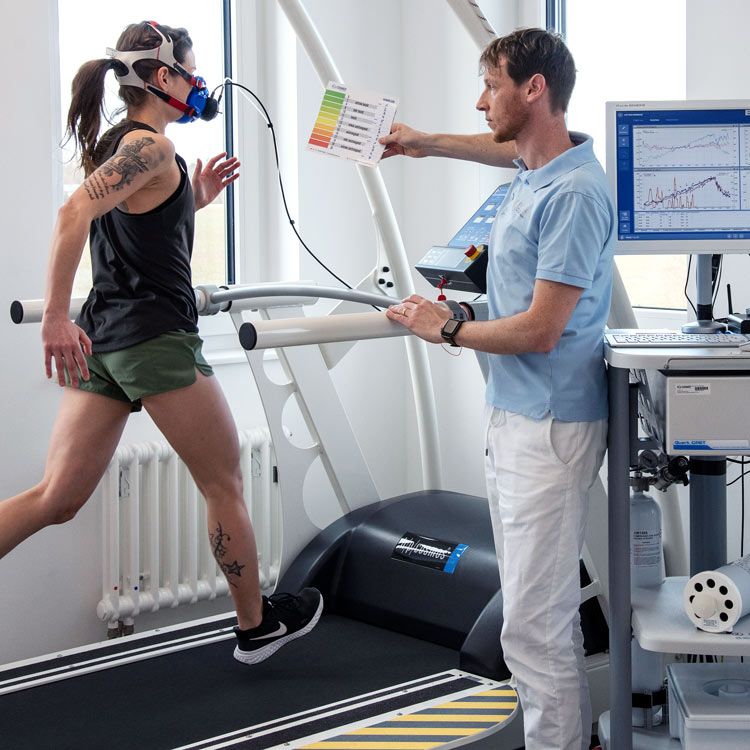 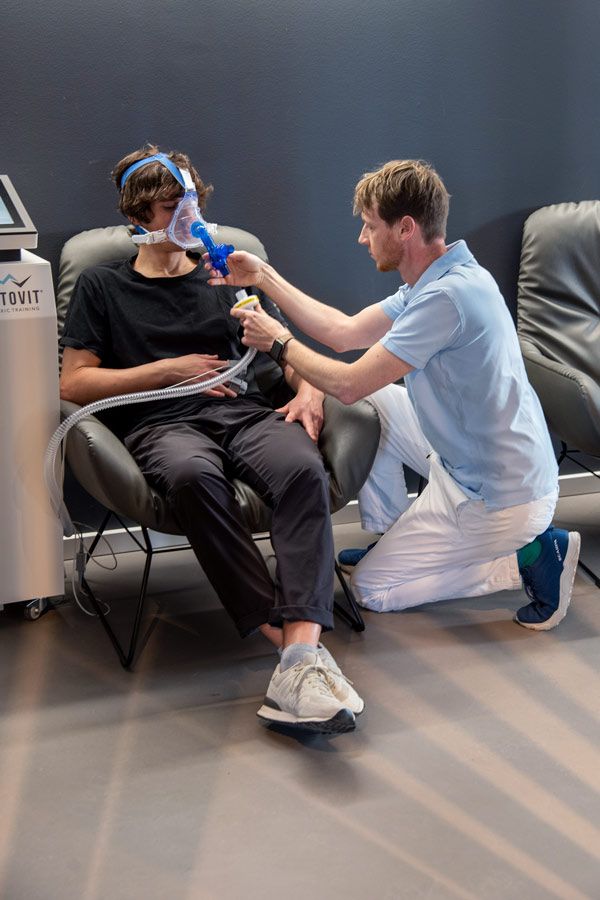 The following schematic curve can be used to explain the process and the results very well.

Before the first movement begins, the rest values are determined.

The warm-up phase serves on the one hand to activate the muscles, and on the other hand it releases the bound CO2 from the tissue in order to breathe it out, so that with the actual start of the test the values are unaltered.

Starting loosely, the load increases until the desired limit is reached. Be it a maximum load for healthy athletes or a submaximal load due to complaints or other contraindications such as a pacemaker.

After reaching the maximum, the intensity is adjusted back to the level of the warm-up phase and breathing, blood pressure, heart rate and emotions can return to normal.

The red curve in the picture shows the heart rate. The course is explained by the different phases: Lowest at rest, slightly higher during warm-up, rising to maximum over the test and then falling again.

The blue curve corresponds to the equivalent of carbohydrate metabolism. With increasing load, carbohydrates are also increasingly needed for energy production.

The grey curve describes the fat metabolism. Interesting here is the fact that there is an optimum for fat burning, which cannot be calculated using formulas, but can only be measured.

The two vertical lines correspond to the so-called ventilatory thresholds.

VT 1 marks the end of optimal fat burning and is accompanied by a slightly increased lactate value in the body, so that the bicarbonate buffers start to work.

VT 2 roughly corresponds to the anaerobic threshold, above which the inhaled oxygen is no longer sufficient to provide the required energy and the body accumulates lactate, i.e., becomes increasingly acidic.

Another interesting value is the VO2max or VO2peak, i.e., the maximum oxygen uptake capacity. From this, among other things, the potential can be derived and also a comparison to high-performance sports can be made.

If you want to delve deeper into the matter, you can take a look at the so-called 9-field graph, which shows all the values of the spiroergometry:

This much should be said: based on the results of the spiroergometry, you get a cardiological and pulmonological interpretation in addition to the training values. This means that the results can be used to assess risks to the heart and lungs.

This website uses cookies to improve your experience while you navigate through the website. Out of these, the cookies that are categorized as necessary are stored on your browser as they are essential for the working of basic functionalities of the website. We also use third-party cookies that help us analyze and understand how you use this website. These cookies will be stored in your browser only with your consent. You also have the option to opt-out of these cookies. But opting out of some of these cookies may affect your browsing experience.
SAVE & ACCEPT